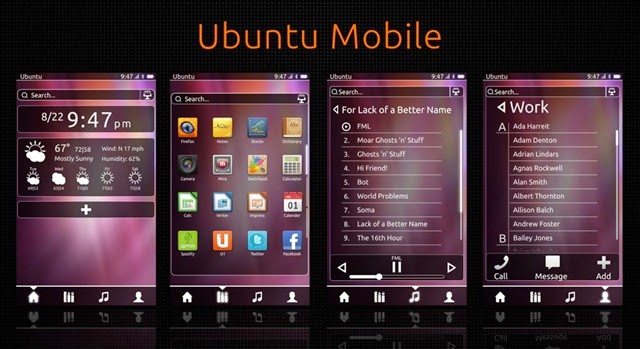 Bring the power of Ubuntu to all your mobile devices.

Here are instructions for installing Ubuntu on devices (phone and tablet). Note: If you are alternatively looking to install Ubuntu on a desktop computer or laptop, you can alternatively download Ubuntu Desktop.

Target devices under active development are here. Community-driven ports to a much wider set of devices (including installation instructions) are here. These ports are not officially supported.

Installing Ubuntu for devices deletes all data (including applications and data such as contacts, photos, and etc.) from the device. An optional procedure is provided below that backs up the Android apps and data to a local file. There is no guarantee that a restore will succeed. See Reinstalling Android.

"Ubuntu for devices" is released for free non-commercial use. It is provided without warranty, even the implied warranty of merchantability, satisfaction or fitness for a particular use. See the licence included with each program for details. Some licences may grant additional rights. This notice shall not limit your rights under each program’s licence. Licences for each program are available in the usr/share/doc directory. Source code for Ubuntu can be downloaded from archive.ubuntu.com. Ubuntu, the Ubuntu logo and Canonical are registered trademarks of Canonical Ltd. All other trademarks are the property of their respective owners. "Ubuntu for devices" is released for limited use due to the inclusion of binary hardware support files. The original components and licenses can be found here.

Here you learn how to prepare your Ubuntu Desktop system. After these steps are completed, you can connect your device to the Desktop and drive an installation from the Desktop.

You need to install the ubuntu-device-flash package. This is published in the phablet-tools PPA.

Ensure you have the universe archive enabled

You need to install the ubuntu-device-flash package. This is published in the Ubuntu universe archive.

The SDK PPA provides additional tools needed to install Ubuntu for devices. Tools are provided for installation on Ubuntu Desktop starting with 12.04 Precise.

Note that there is a no-longer updated version of the phablet-tools package in trusty/universe. Please use the PPA instead.

The ubuntu-device-flash package is your main tool for installing Ubuntu for devices.

After installation, you can display the help page for the ubuntu-device-flash tool as follows:

Press ‘q’ to quit the help.

The phablet-tools package provides a Desktop tools useful when working with a USB-connected Ubuntu device. For example, click-buddy creates a click package and runs it on the device, phablet-screenshot takes a screenshot from the device and saves it in your current directory, phablet-bootchart creates a bootchart image, and more.

About adb and fastboot

The instructions here are complete, but you may also want to view help for these tools. A convenient method is piping them into less, then using up and down arrows to scroll and ‘q’ to quit, as follows:

Before you install Ubuntu, you should save some key data. This includes backing up your Android apps and user data and saving some data about your device to make it easier to reinstall Android later. Saving Android data over USB from your Ubuntu Desktop requires first enabling Developer Mode and USB Debugging from the Android OS, as explained next.

Here, you enable Developer Mode on your device.

A pop-up informs you that you have succeeded.

Here, you enable USB Debugging. This is required for a USB terminal connection from your Desktop to your device. After enabling Developer Mode, the Developer options item is exposed in the Settings page.

When a device is connected, you are prompted in Android to authorize it.

Tip: If the device does not display, try running adb kill-server first. Now, the device is fully connected to your Ubuntu Desktop for development/installation operations.

Before installing Ubuntu for devices, you can optionally create a backup file on the Desktop that saves your Android applications and data. You can use this backup file later to restore your applications and data if you decide to reinstall native Android on the device. Tip: To restore Android from the backup, see Reinstalling and Restoring Android.

A file containing your backup is created in your current working directory named: ./backup.ab. Save this file securely.

You may want to reinstall Android later. To do this, it is helpful to write down and save key data. This data helps you open the right Android web page to download the files needed to restore your device to Android. You can obtain this information from the Android device’s /system/build.prop file.

Tip: For convenience, run this command and the data is written to a file named mydevicedata:

Here’s how the generated file may look:

To install Ubuntu, you must first “unlock” the Android device bootloader. Warning: Unlocking deletes all data from the device, including apps and other data. You may want to create a backup first. You must first have enabled USB Debugging in the Android OS.

Here you take the final steps that install Ubuntu.

Warning: If your device is encrypted you must perform a full factory reset before installing ubuntu. This also will delete all data from the device, including apps and other data. You may want to create a backup first. You can perform a factory reset via the settings screen. Look for Backup & reset option on the latest versions of Android or tap Privacy if you’re using Android 2.3.

When you install, you’ll need to name the Ubuntu device image channel used to obtain the image. For guidance on which channel is best for you check out the Channel selection guide. Tip: After installing, you can always switch to another channel.

If you intend to use your Ubuntu device for development and to simplify access to it (through scripts or the command line), you might want to enable the developer mode. To do this, go to Settings → About this device → Developer mode.

Some of the commands mentioned below (particularly those using adb shell) will assume that Developer mode is turned on.

Note: The default channel used when none is explicitly stated is stable. In the following examples, CHANNEL indicates the channel your Ubuntu was installed from. See Display image channel information. If you have configured the system to never install updates automatically, you can check for available updates and optionally install from Settings > Updates. You can display information about what image would be installed if you were to upgrade:

You can manually initiate an upgrade:

You can reinstall Ubuntu after deleting all user data and apps:

Other image and install options

You can specify the version of the Ubuntu image to install:

You can display the current channel and other information:

This device is on channel devel, which is shown to be currently an alias for trusty. The version is 299.

The system reboots in read-write mode.

You can disable read-write and restore automatic over-the-air updates:

To restore the normally read-write protected system area to a pristine state that does not include any changes you made while in read-write mode by installing the Ubuntu system:

Now that you have Ubuntu running on your phone, what should you do to get the most out of it?

You can browse or search for more apps or scopes to install on your phone from the Ubuntu Store. To access it, swipe up from the bottom edge on the Apps dash screen, then press the Store button. Scopes can be installed to provide easily searchable content in addition to the Apps, Music and Videos scopes that are provided by default. Apps will be added to the Apps scope automatically, and you can pin them to your launcher for easy access any time.

Write your own Apps or Scopes

Developing apps and scopes for Ubuntu is fast, easy and free! Once you download the Ubuntu SDK you can follow along with our tutorials for writing your first app or your first scope. Then you can publish them to the Ubuntu Store for other users to enjoy!

If you got lost somewhere, you found a bug or need some help, we’re happy to help you. Ubuntu for devices is put together by a community of many people who are eager to work with you.